A place of extraordinary contrasts with its rugged volcanic peaks, verdant rainforests, white sandy beaches, rolling surf and tranquil lagoon, Lord Howe Island is encircled by the southern-most coral reef in the world and became one of the first three islands worldwide to be inscribed on the UNESCO World Heritage List. Only 280 people call the island home and to preserve Lord Howe’s unique and precious natural environment, visitor numbers are restricted to 400 at any one time.

Situated in the South Pacific Ocean, 440 miles north-east of Sydney, Lord Howe Island is less than 2 hours’ flight time from Sydney or Brisbane. 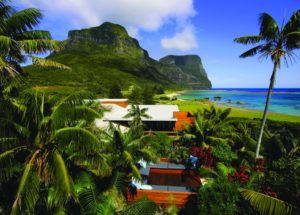 Dear Kit, The trip to Bay of Many Coves could not have been more perfect for us. Thank you for taking the time to listen to what I was trying to accomplish. I found being able to talk to you and to have you be knowledgeable about the area to be of great help. Thank you so very much for this experience. If we ever venture to this part of the world again, I will ask you to help us again. I hope our future travel experience are like this…I am afraid you and your group spoiled us! The phrase we learned in New Zealand is appropriate here: Good on you!