Jacky was in London last week attending World Travel Market and the highlight of her trip was seeing the 888,246 ceramic poppies filling the moat around the Tower of London. It opened in August to mark the centenary of World War I, with the Queen and the Duke of Edinburgh paying a visit, and is due to be dismantled the day after Armistice Day. Each poppy represents a British life lost in World War I. Poppies are sold everywhere in the UK for you to wear – all the shops, hotels and restaurants sell them to raise money for the returning veterans from today’s conflicts.

As some of you know, Esplanade represented Swan Hellenic for more than 30 years, offering art and archaeological cruises and tours around the world. But, the company originally named Swan’s Travel Bureau, started with W.F. Swan arranging travel to Flanders for war widows wishing to take poppies to the war graves in the aftermath of World War I. R.K. Swan joined his father in the family business which became Swan Hellenic and they brought the ancient world to so many happy travelers.

The Allied victory on 11th November 1918 marked the end of the German, Russian, Ottoman and Austro-Hungarian empires, saw the formation of new countries in Europe and the Middle East and established the League of Nations which became the United Nations after World War II. The Great War heavily affected the psyche of Western Europe and the vast loss of lives lost to this dark time are due to be gracefully remembered in the next four years to come. If you want to find out what events are happening all over the world to commemorate the war, click here. We would be more than happy to send you to Europe to experience any of these special events. 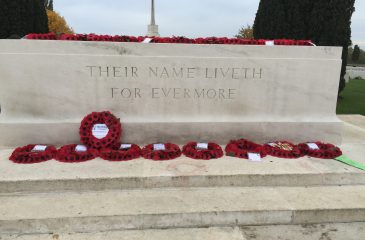 A note from our President, Jacky Keith: As we celebrated Memorial Day last weekend, it reminded me of the very beginning of Swan Hellenic, our association in England for more than 30 years. Originally named W.F. & R.K Swan Ltd., Swans was started after the First World War when W.F. Swan flew war widows to… Read More

Every year in November we are reminded of all we have to be thankful for – friends, family, and the ability to travel the world far and wide. Esplanade is so thankful to share our favorite destinations and love of exploration with fellow travelers. Happy Thanksgiving! From Jacky, Bill, Kit, Jill, Diane, Harvey, Ksusha, Leah,… Read More

Have you ever been frustrated with the domestic flight options connecting to your long haul international flights? Stress no more – Esplanade has heard your comments and is happy to offer a new option for domestic travel. We now work with an excellent air charter company that provides custom flights to connect to gateways anywhere… Read More

Dear Kit, The trip to Bay of Many Coves could not have been more perfect for us. Thank you for taking the time to listen to what I was trying to accomplish. I found being able to talk to you and to have you be knowledgeable about the area to be of great help. Thank you so very much for this experience. If we ever venture to this part of the world again, I will ask you to help us again. I hope our future travel experience are like this…I am afraid you and your group spoiled us! The phrase we learned in New Zealand is appropriate here: Good on you!