To me, every trip is an adventure. However, when I think about my two weeks in Colombia and Costa Rica, “adventure” seems too small a word. It was a quest through Latin America, where my destinations were constantly the most beautiful places I’d ever seen.

My journey started with a short 3-hour flight from Miami to Bogota and my first stop was Cathedral del Sal (Salt Cathedral), which was originally a salt mining location for 20 years before construction of the Cathedral began. What was initially a prayer room for miners before starting their shifts was turned into an entire cathedral, complete with life-size Stations of the Cross, located 200 meters below ground. With everything built from salt except the wooden pews and multi-color lights illuminating the sanctuaries, it is truly a spectacular sight.

The next day, I took an excursion an hour outside of Bogota to Laguna Guatavita commonly referred to as El Lago Sagrado (The Sacred Lake). It is here that the Spanish armies encountered Colombia’s Muisca indigenous people making sacrifices of gold to the Sun-god. When the Spaniards saw men adorned in gold outfits, putting gold on rafts in the lake, the legend of El Dorado began. Over the next eight years, the Spanish built a dam to empty the lake and transported over 14 loads of gold back to Spain.

After a one-hour flight from Bogota, I found myself in Pereira, the heart of Colombia’s coffee region. I visited a coffee plantation, learned about the coffee growing and roasting processes, and enjoyed a coffee tasting to discover the different techniques used to make Colombian coffee so rich.

Following Pereira was a brief visit to Cartagena to visit the old city and the Miami-feeling new city on the coast. I walked along the old city within the 9-mile original brick fortress perimeter, which began construction in 1536 to protect the city from pirates and attacking armies.

Then, my adventure to Costa Rica began, and I spent a week exploring a country the size of West Virginia which holds 3% of the world’s biodiversity. After a scenic drive through Costa Rican jungle, and an hour-long boat ride through a national forest, I arrived in Tortuguero. Home of Tortuguero National Park, this area also has one of Costa Rica’s largest sea turtle conservatories- tortuga means “turtle” in Spanish. I took a walk along the beach – very carefully! – where thousands of Costa Rican turtles hatch and make their way to the sea every year. Parque Nacional de Tortuguero is also home to thousands of different species ranging from howler monkeys to jaguars, and from caimans to toucans. Traveling by boat through the national park gave us the rare opportunity to see different species in ways many people are not able. By traveling via boat, we had the advantage of being much quieter in our approach than if we were in a motor vehicle or on foot.

After three days in Tortuguero, I got to test my adrenalin in Monteverde, where I found Latin America’s longest zip line – winding its way through the Cloud Forest – in a beautifully green part of Costa Rica located 1400 meters above sea level. With 15 different zip lines and a grand finale at the Tarzan Swing, my heart and blood were left pumping for the rest of the day.

My adventure ended on a calmer note in the beach town of Manuel Antonio. Heat and humidity were not spared, but neither was the beauty. With a spectacular view from my hilltop hotel down to the beach, each sunrise and sunset showed colors I’d never seen in the sky before. On my last day, I went on a snorkeling cruise along the coast. While at sea, we saw two spirited dolphins, and a mother and calf humpback whale pair that followed our boat for 20 minutes, often breaching the water and giving us friendly waves goodbye.

After a trip, the most common question I get asked is, “What was your favorite part?” With such a diverse itinerary, it is difficult to choose the best part of my trip, but I am happy to look back through my photos and relive my trip as often as possible to try and decide! 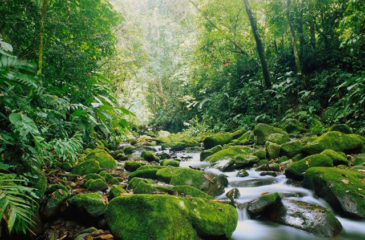 The best evidence of an excellent vacation is when travelers want to return! Esplanade has dear clients who love Costa Rica so much they have returned multiple times. It’s not only the stunning beaches and adrenaline-rush activities available that make people fall in love with the country – it is the local hospitality with which… Read More

In 1965, two brothers with a boat and a dream started a business on Arthurs Point Beach in New Zealand. That dream has turned into Shotover Jet Services, the first jet boat operator in the world to have been in operation for 50 years. Shotover is known throughout the world as the premier adventure tourism… Read More

Jacky and Bill recently returned from a lovely 50th wedding anniversary trip to the United Arab Emirates. Here’s more from Jacky: Bill and I just came back from the Arabian desert with a wonderful return visit to Al Maha Resort & Spa and the Dubai coast, followed by a spectacular room at Jumeirah Beach Hotel.… Read More