When I lived in Botswana as a Peace Corps Volunteer, despite it being the most rewarding two years of my life, I often felt as if I was an outsider looking in. I was nervous to return to the country this past December, wondering if it would feel like home or if I had somehow forgotten everything I learned. I even printed out a Setswana language guide to brush up with while on the plane!

My nerves immediately turned to excitement as I boarded an Air Botswana flight from Johannesburg to Kasane, in the northeast of the country. I couldn’t believe that I was returning to this country I loved so much, and even more excited that I would get to experience the luxury travel side (rather than backpacking and hitchhiking).

My trip started with a tourism conference which opened my eyes to an entirely new side of the country and gave me endless respect for what Botswana (the government, private companies,and individuals) has done for tourism and conservation. I met so many interesting people, many who work out in the bush running camps, lodges, and tour companies. More so than ever, I felt proud to be a part of Esplanade and completely confident that our guests are in good hands when they arrive in-country.

The highlight of the trip was after the conference, when I was able to “camp hop” around the Desert & Delta properties in Botswana. Each camp has such personality and is completely unique – not only the décor and atmosphere, but the dedicated staff that took the time to get to know each and every guest. There’s nothing quite like being serenaded before dinner and joining in the dancing! (I even recognized some of the songs – a personal point of pride.)

At times, it was almost hard to leave the comfort of camp for the twice-daily game drives (picture it: spacious tents with plush bedding and views of the bush, sparkling pools with cold beverages, and welcoming common areas where guests share wildlife stories). But of course that didn’t stop me – the wild was calling! – and I had some of my most amazing wildlife experiences to date. 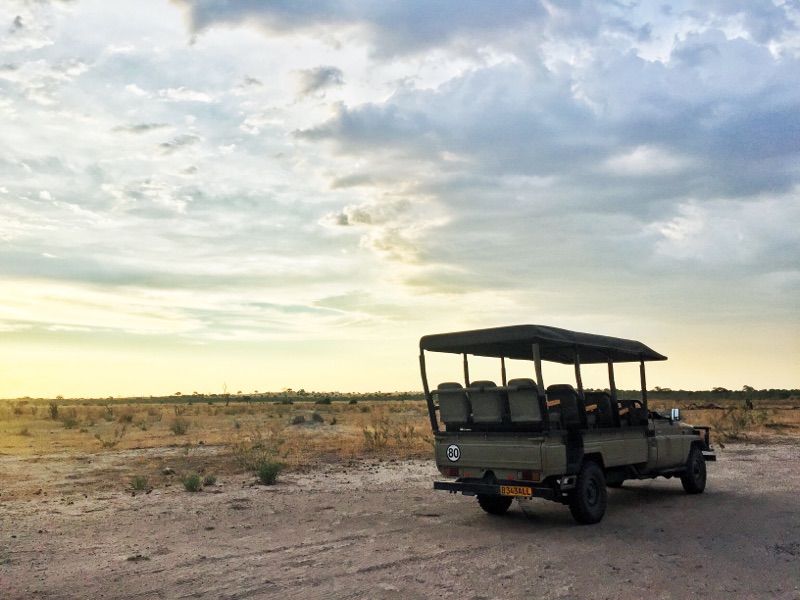 My favorite camp and game drive was at Leroo La Tau in Makgadikgadi Pans National Park. This is not a region of Botswana that first-time visitors usually visit (most people immediately head to Chobe National Park and the Okavango Delta) but the nature here blew me away. 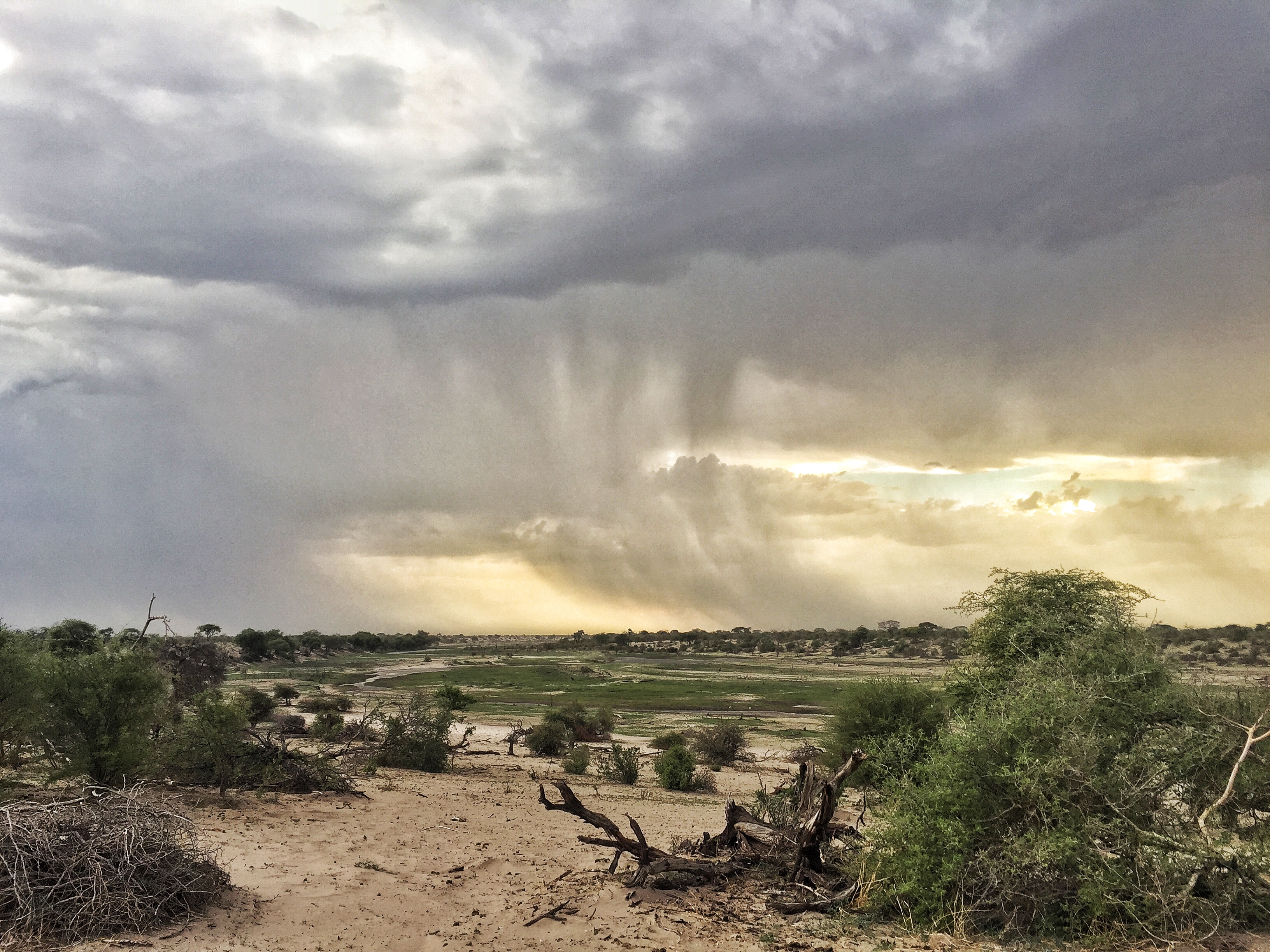 In the afternoon, we headed off through a dried-up river bed. The sun was shining as we left, but slowly the sky darkened and a wicked wind and dust storm took up. The sky was the most epic shade of dusty golden orange I have ever seen, and the sudden chill in the air made the afternoon feel somehow magical and other-worldly. Our truck went blasting through the bush, not another soul in sight. That might’ve been part of what made Leroo La Tau extra special – you had the feeling that you were the only people out there, just you, the bush, and the animals.

All of the sudden our guide took off in the opposite direction and said, “Tau.” Now this is where my knowledge of the language came in handy – I immediately knew that he had spotted a lion! 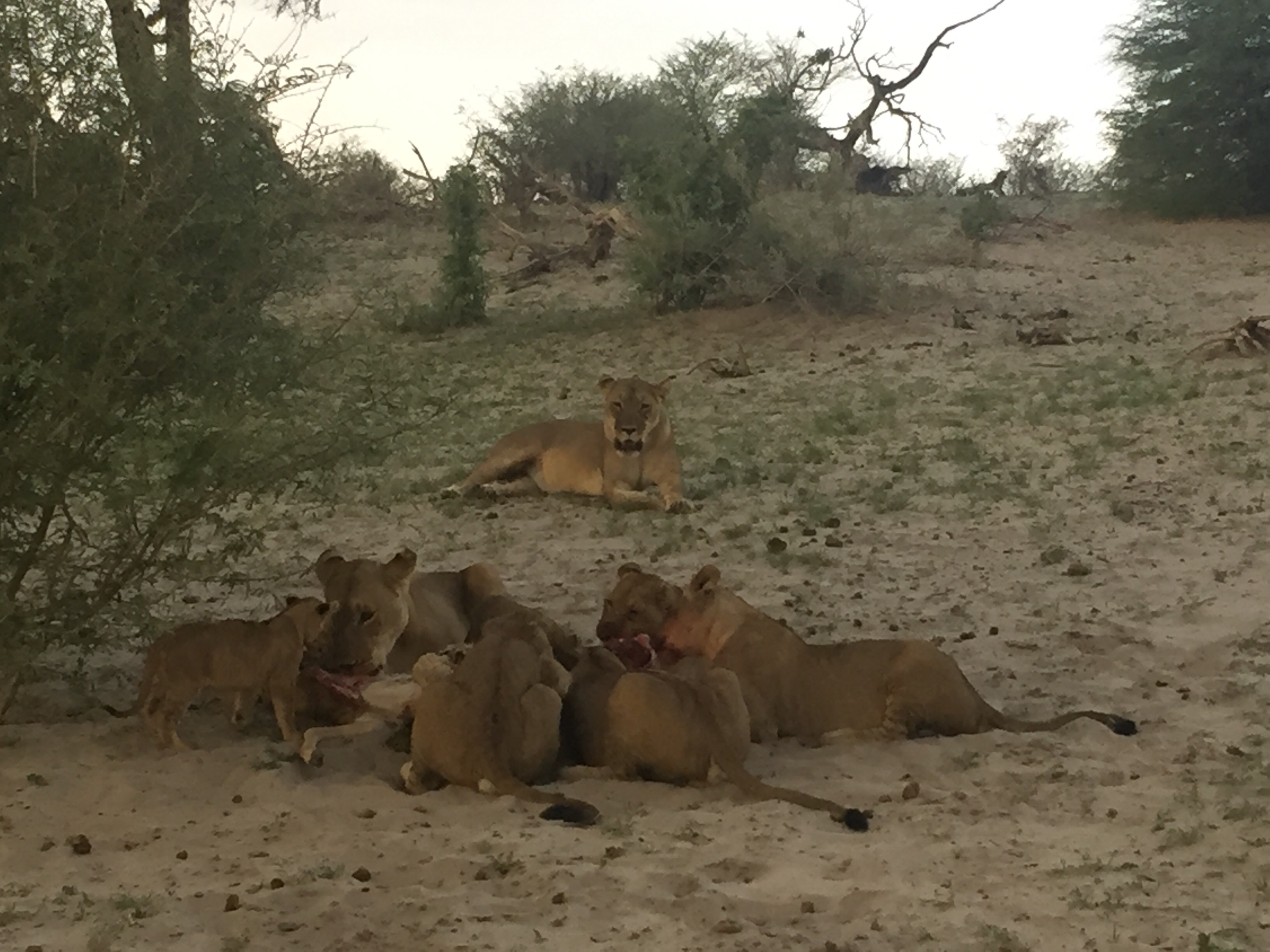 The wind and dust brought in a storm and thunder boomed all around us, lightning striking in multiple places along the horizon, lighting up the entire sky. Rain poured in from every angle, as we pulled up to a pride of lions on a kill. Any lion sighting is a good lion sighting, but this pride had the most adorable cubs, trying their best to be “grown ups” and eat with the rest of them.

The female lions suddenly stood up and looked straight past our truck: a male lion was approaching. Chaos ensued as he circled the pack, demanding that he get the rest of the kill. The mother lion fought valiantly so that her cubs could finish eating, but after a tussle she and the cubs retreated and the male lion took the remainders to a bush farther away.

Somehow, despite the rain and thunder and wind, silence reigned in the bush. I watched the female lions and cubs slowly walk off into the distance, off to find somewhere more peaceful to rest. A sense of awe came over me: I had seen something so amazing, so natural, and yet something that so few people ever get to see in their lifetime. What a privilege; what an honor. 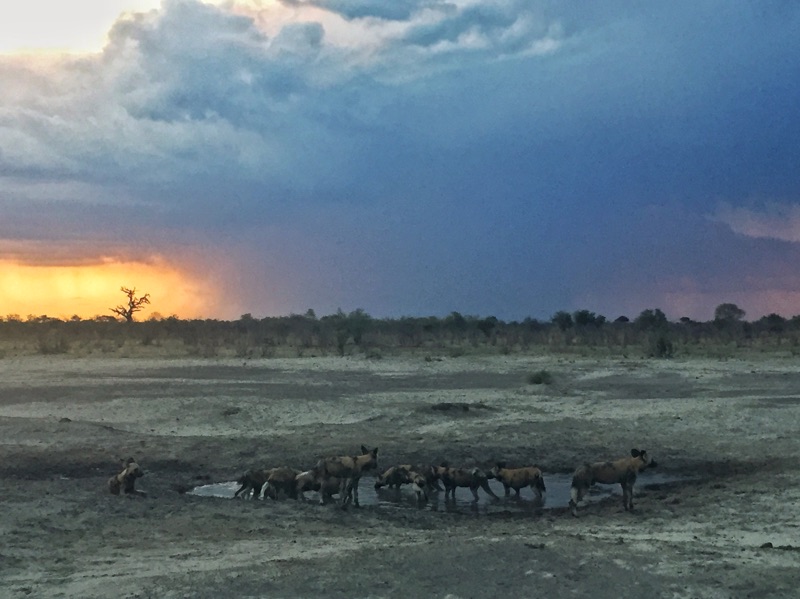 Every camp and each game drive brought unique moments like this, and it’s why Botswana will always be the top destination for wildlife viewing in the world. To have been a part of this country as a Peace Corps Volunteer and to now share that with my clients and open their eyes to the wonders of Botswana… well, there’s nothing else I’d rather do. 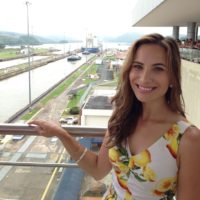 Tess is a former Peace Corps Volunteer and has traveled extensively in southern Africa. She also has a passion for planning trips to South America, Antarctica, India, Greenland, and anywhere else her clients can dream up!

Looking for a unique holiday gift for someone special? How about an African safari? Right now we are happy to offer special pricing at the renowned Wilderness Safaris camps. Stay for 5 nights at camp and get the 6th night free! This would be a great standalone trip, or if you’re looking to get away… Read More 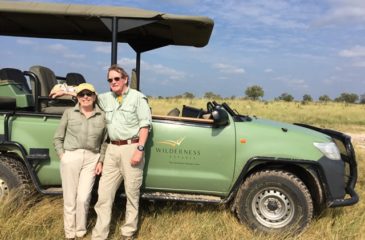 Bill and I just returned from a fantastic trip to the Wilderness Safaris’ camps in   Africa. It never gets old or disappoints and this was no exception. We flew on Emirates directly from Boston via Dubai and their business class is superb. As they offer ‘specials’ quite often during the year, this is definitely… Read More

July found us back in the African bush with a small group of friends. Some were joining us for the third time while others were on their first safari. Once on board our South African Airways flight out of JFK you get the feeling you’re already there and it’s fun traveling with friends. A short… Read More