We’re excited to share that Qantas has recently announced two new direct routes from the US to Australia, making it even easier to go Down Under!

Non-stop from San Francisco to Brisbane will begin on February 8th, 2020 operating three times per week.

Non-stop from Chicago to Brisbane will begin on April 20th, 2020 operating four times per week.

Both flight routes are available for sale immediately and each will be operated by Qantas’ Boeing 787-9 Dreamliner aircraft, offering customers next-generation seating and built-in jet lag reducing features.

Qantas also announced a new cabin refurbishment for their 12 Airbus A380s fleet! Structural changes are being focused on the upper deck where 30 Economy seats will be removed along with some partitions and a crew workstation will be rearranged. These adjustments will allow for the space to be used more effectively and for an additional 6 Business Class and 25 Premium Economy seats to be put in the space. We always say that Premium Economy is the best value on the aircraft, because you get significantly more comfort than Economy Class without breaking the bank.

Other important elements of the A380 upgrade program include:

• Replacing Business Class Skybeds with the latest version of Qantas’ Business Suites. Every seat has direct aisle access and allows better use of cabin space compared with the Skybed.
• Installing the airline’s all new Premium Economy seat in a 2-3-2 configuration. The seat is almost 10 per cent wider than the model it replaces and will debut on the Dreamliner later this year.
• Reconfiguring the front of the A380’s upper deck to redesign the passenger lounge to provide more room for First and Business Class customers to dine and relax.
• In enhancing First Class, each suite will be fully refurbished, including contoured cushioning and a larger, higher resolution entertainment screen.
• Updating Economy with new seat cushions and improved in-flight entertainment.

Work on the Airbus A380s fleet is expected to begin in the second half of 2019. It is anticipated that all 12 aircraft will be upgraded by the end of 2020.

Flying to Australia has never been this easy and comfortable, so who’s ready to go? 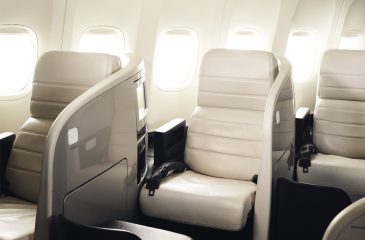 Air New Zealand is excited to announce that beginning in December 2017, they started flying the Boeing 787-9 Dreamliner between Houston and Auckland year round. During peak season, Air New Zealand will be increasing to seven services per week. The Dreamliner has more premium seating options than ever before. These options include the Economy Skycouch,… Read More

We are pleased to announce that Qantas new non-stop flights from San Francisco to Sydney are now available to book. Subject to government regulatory approval, flights will commence 18 December 2015. These flights will use the Qantas newer B747 aircraft, featuring their flagship interiors including fully flat beds in Business, spacious seats in Premium Economy with… Read More

The trip you put together was amazing. The variety of lodging and great hosts will be remembered for a long time. Thanks for a job well done.