Air New Zealand today announced that tickets are now on sale for its nonstop service from Houston, Texas to Auckland, New Zealand. The airline will operate its inaugural Houston-Auckland flight on Tuesday, Dec. 15, 2015.

The new Houston gateway will be the airline’s fifth in North America (also Los Angeles, San Francisco, Vancouver and Honolulu) and fourth in the United States, increasing service to Auckland over peak season up to 34 times per week from the U.S. Houston will serve as the fastest way to access New Zealand from East Coast and Midwest points of origin.

Air New Zealand’s Houston – Auckland schedule from December 15, 2015 will be as follows:

Air New Zealand is thrilled to announce it will expand its North American presence by opening a fifth gateway this December. The airline will soon provide nonstop service between Houston, Texas and Auckland, New Zealand up to five times per week. Tickets are expected to go on sale in May, with flights commencing mid-December, 2015.… Read More 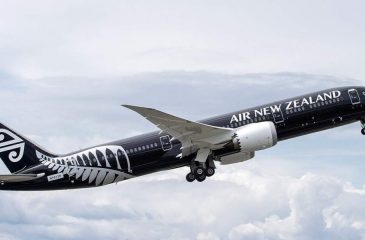 Air New Zealand is excited to announce that they are launching non-stop flights from New York to Auckland beginning October 2020! Using their Boeing 787-9 Dreamliner fleet, the new route will be operating three times weekly, year-round out of Newark Liberty International Airport. While tickets are not yet for sale, Esplanade will keep you updated… Read More

Is New Zealand on your bucket list? Have you ever imagined yourself visiting the natural beauty of Milford Sound, exploring the adventure capital of Queenstown or sipping wine on Waiheke Island? Well, now is the time to make it a reality! Esplanade Travel is happy to announce that Air New Zealand flights from the United… Read More