The modern nation of Turkey bridges two major continents and this has led to the country’s unique identity. As a gateway between Europe and Asia, the area has seen human activity for over 40,000 years which has created a melting pot culture. No matter where you go in Turkey, you will find fascinating history, rich food, friendly people and plenty of local markets where you can haggle over intricate Turkish rugs and remarkable mother of pearl boxes.

For your first trip to Turkey, make sure to stop in Istanbul. Previously known as Byzantium and then Constantinople, the city that straddles the Bosphorus Strait is Turkey’s historic, economic and cultural center. Listen to the call of prayer at the Sultan Ahmed Mosque, better known as the Blue Mosque because of the blue tiles that adorn its interior walls. Visit the Hagia Sophia, a former Byzantine cathedral and later an Ottoman mosque, it is a present-day museum and one of the world’s greatest examples of Byzantine architecture. Marvel at the subterranean columns of the Basilica Cistern and immerse yourself into Ottoman culture at the Topkapi Palace. Dive into local culture as you bargain for Turkish treasures at the bustling Grand Bazaar and the colorful Spice Bazaar. Amazing food is at every corner, so eat your way through the city as you explore all of Istanbul’s hidden gems.

Central Anatolia is an area that has steeped in history for thousands of years and the region is almost lunar in appearance with its fairy chimney rock formations and arid landscape. It has been an important economic center for centuries. The seat of the ancient Hittite Empire was at Hattusa in the 2nd and 1st millennia BC and it is currently a very well-preserved UNESCO site in the north of the region. The empire was an important player in the economic development of the region and its effects can still be felt today. Ankara, the capital of Turkey and the second largest city in the country, is found in the heart of the region and it has become particularly famous for the production of mohair and Angora wool. While in Ankara, you can stop by the mausoleum of Mustafa Kemal Ataturk who is considered to be the father of the Republic of Turkey. Cappadocia is famous for its unique fairy chimneys, cave churches and underground cities. The best way to see its incredible landscape is on a hot air balloon ride at sunrise – a magical experience.

Travel back in time as you visit Izmir, Ephesus and Troy on Turkey’s Mediterranean coast. Izmir, known as Smyrna during ancient times, was able to develop into an influential port town because of its prime location and the ruins from this remarkable city are still in excellent condition. Ephesus was once home to the temple of Artemis, which was one of the Seven Wonders of the World, but the temple was sadly destroyed in 356BC – a replica model was built to help visitors imagine the site in its full glory but nothing can ever compare. There are also a large number of ruins that have survived the centuries at Ephesus, including the exquisite Library of Celsus that was built to hold 12,000 scrolls. The mythic city of Troy is to the north and was long considered to be a myth until it was discovered in the 19th century. Although overly enthusiastic archaeologists destroyed the layer of ruins that was from the epic Trojan War, the site of Troy is still one of the most impressive ancient sites that Turkey has to offer.

If you are after some R&R, spend a few days in Antalya, Turkey’s main holiday resort. Located on the Mediterrannean coast, this gateway to the Turkish riviera has great restaurants, shopping, stunning clifftop views and beautiful beaches. 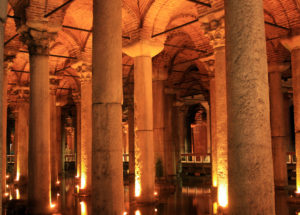 Visit historic Istanbul, cruise the Turkish coast or visit the ruins of Troy in this unique region that serves as a gateway between Europe and Asia