Ireland’s popularity as a tourist destination has grown immensely over the last few years – and it’s easy to understand why. It has a profound cultural heritage dating back many millennia. In fact, there are Neolithic passage tombs north of Dublin that date back to before the Giza pyramids were built! From Celtic ruins and medieval castles and forts to incredible stately homes, and little villages, there is much to see in this small, green country.

Dublin is a perfect place to land and explore while getting over your jetlag. There are wonderful traditional pubs, stunning Georgian architecture and Viking history, the beautiful campus of Trinity College, (which was founded by Queen Elizabeth I in 1592!), all set on the banks of the Liffey River. Have tea in one of the beautiful hotels on St. Stephen’s Green or take a historical walking tour of the city center with one of our knowledgeable guides.

Once outside of Dublin, the landscape is just spectacular, and seems unchanged since hundreds of years. Visit Cork and Kerry for the beautiful coastline and charming fishing villages, or head up into the Ring of Kerry and Killarney National Park for mountains and lakes. All the while you pass through incredible towns along winding roads, with medieval castles tucked in here and there. The Rock of Cashel is a rocky outcropping rising dramatically out of the Tipperary plain with fantastic views from the peak. It was a stronghold of the Munster Kings and dates back to the 5th century, with an amazing 92 foot tall stone round tower rising above it all.

The limestone plateau of the Burren runs along the west coast to the Cliffs of Moher, where you can see an incredible variety of wildflowers and fauna that are particular to the region. The craggy stone walls and moss covered limestone are stunningly stark – and beautiful. Ask us about the perfumery in the region, or the bean to bar chocolate factory in the hills, or the ancient portal tombs. It’s a fascinating part of Ireland!

Any trip to Ireland would be incomplete without a stop in Galway, one of Ireland’s fastest growing cities on the River Corrib. Galway is the center of the Irish-speaking regions of the west, and a lively university city to boot. It has managed to retain its small town feel and charm, and you cannot get friendlier people. The city is also known as a festival town, as there is a festival on from St. Patrick’s Day through the end of October. 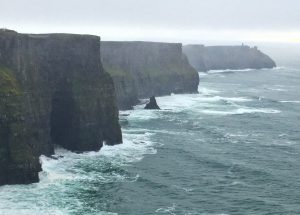 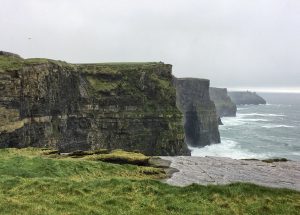